Mozilla is hosting a giant “Science Fair” at the March 1 “Digital Media and Learning” conference in San Francisco. Our mission: gather folks doing amazing work at the intersection of learning, youth and the web, have them set up 20+ booths and interactive show-and-tell stations, then invite educators, youth and local SF VIPs to all mingle, chat and get their hands dirty.

You can learn more or have a look at how the DML Science Fair is coming together here.

Cool re-usable “open branding” elements for all our events

As Mark wrote last week, we were blown away by the terrific job the Mozilla Japan team did in creating a fun physical presence for the Vision 2012 event. So we want to try and replicate their work for the Science Fair.

Mozilla Japan’s Tetsuya Kosaka was kind enough to send us their original assets, and we’ve simply tweaked the language on them for the event (below). We’re hoping to re-use and re-purpose them at other upcoming events.

I like the way these signs contain clear Mozilla branding, but also open whiteboard space for exhibitors and friends to decorate and put their own stamp on it. Feels very Mozilla — like “open branding.” Plus a lot more versatile and re-usable.

We may eventually update the visual language beyond the “space” theme, but for now it seems great and very “Science Fair-ish.”

We are indebted to the work of Eriko Saito (CNS Inc.) as the creative designer on this project. CNS Inc. is a company Mozilla Japan worked with for planning and executing
the Mozilla Vision 2012 event in Japan. Eriko was in charge of designing key
visuals, and did an amazing job. 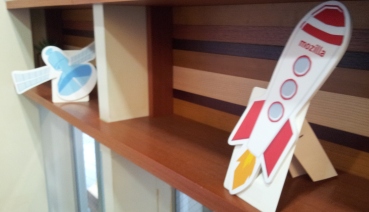 ...in the same six versions

Statement of Work for Printing

§ 2 Responses to Mozilla DML Science Fair: prepping for blast off